There seems to be two meanings for this idiom, both dependent on the same metaphoric setting and action — but while one is mostly positive, the other, not so much. The first connotes a situation in which a person does something (whistling, maybe?) to make of show – to others, or even more commonly, to oneself — of bravery, or at least nonchalance, in the face of danger or difficulties.

The second meaning describes an individual who is genuinely confident and cheerful while in pursuit of a course of action at the same time blithely oblivious to the real risks involved – i.e., clueless. 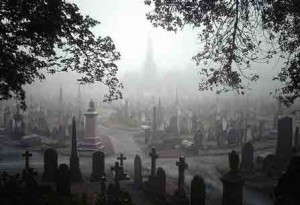 An example of the first definition of this sepulchral catchphrase is the scene in the movie Zulu, a boyhood favorite movie of mine, wherein the hopelessly outnumbered British redcoats face down their tribal adversaries by singing, in harmony, a rousing regimental song.

The heroic scene described above also demonstrates another aspect of the more positive meaning of  “whistling past the graveyard” in that an individual can actually generate real calmness and courage, and not just the appearance of these feelings, by performing some token of casualness while confronting fear.

The darker meaning of the same expression which notes the foolish confidence of one who does not understand the real difficulties or even dangers of his or her situation brings to mind the Battle of Little Big Horn. (Scout: “General Custer, sir, should we retreat? ” Custer: “Retreat? Hell, no, we’ve got them surrounded.”)

What interests me most about this expression and why I think it will eventually pass from popular usage is the fact that it is grounded in a kind of urban experience that is enjoyed firsthand by fewer and fewer persons, who are more and more suburban-born and automobile-dependent.

Remembering the Midwest urban landscape of my boomer childhood, it seemed that my buddies and I lived and played amidst a jumble of tall-spired medieval-style churches, banks that looked like Roman temples and colleges that looked like castles, all interspersed among homes big and small on streets that were safe and populated by way fewer cars, and that above all else, were easily walkable, or at least bikeable on our Schwinns. Prominent in this geography was the nearby cemetery, almost a hundred years old by then, smack in the middle of the residential area that had grown up around it.

The graveyard was big and sprawling yet stately and park-like, with wandering roads and paths, with ponds and gardens and stands of weeping willows, and with marble statures of grieving angels and sleeping infants. Located on the cemetery’s gentle hills were whole little neighborhoods of stone mausoleums – massive brooding structures, some as large as my local public library – and below them, row upon row of polished granite tombstones. All of this was encircled by a tall Victorian-era black cast iron fence, with gates topped with spearhead finials. 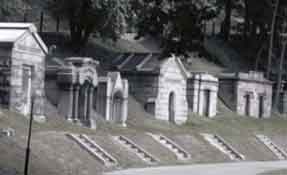 It was on a hot August Saturday moonlit night, after seeing a Vincent Price horror movie at the Avalon, a neighborhood theater located on the other side of cemetery, that the Brundig twin brothers, Tony and Phil, and I, all of us sixth graders at Saints Cyril and Methodius, decided to take a shortcut home through the grounds (the gates were never closed.) This was something we had done many times before, but never after dark. I remember Tony Brundig saying ”Come on, guys. After all, we’re almost in seventh grade,” after which he made chicken clucking noises to help shame/encourage us into following his lead.

Maybe it was the movie, though now I do not remember it being particularly terrifying. Or maybe it was the intermittent streaks of heat lightening that we saw playing in the distance beyond the cemetery that gave the night a primordial feel, like that “Night on Bald Mountain” segment in Disney’s Fantasia.

And then it hit me. Although I did not share my thoughts with the Brundig boys, I suddenly, chillingly, comprehended that underneath us, and in the hills, were thousands, no tens of thousands of dead people. Well, of course, that’s what burial grounds are for. But in that moment in a rush, I had an instant vision of a teaming city of animated corpses, six feet below us, riding in dead people buses, going to dead people stores, and yes, attending dead people’s parochial schools and going to dead people movie theaters.

Then I realized I was talking louder than usual and laughing harder than normal, even for an eleven-year-old boy. And so were my friends. Our lively noise bounced off the grave markers and filled the void, and created something like an aural luminescence of its own that enveloped us, protected us, and helped lead us out of the cemetery. And though I can’t be sure, I seem to recall at least one of us whistling as we approached the graveyard’s main exit gate. 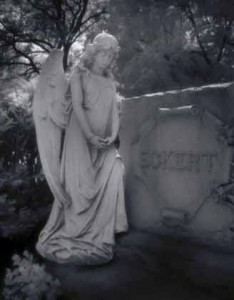