Oddly, this rejoinder has two connotations, one British and negative, the other American, and entirely positive. The Brit meaning depends on a widespread belief that as a class of soldiers, marines are exceptionally gullible (their marines, not ours) and implies that only fools would accept a particular story or set of facts as true.

On the other hand, the American version posits that U.S. Marines, as a group, are exceptionally tough, discerning, quick thinking and quick acting, and that anyone who says or does anything harmful to America must be prepared to accept the consequences.

Regarding the British use of the catchphrase, the first appearance of this expression is in John Davis’s The Post Captain, or the Wooden Walls Well Manned Comprehending a View of Naval Society and Manners published in 1804. “He may tell that to the marines,” wrote Davis, “but the sailors will not believe him.”

Which conveys the then-popular notion the marines posted on warships as guards, as snipers, and as part of landing or ship-boarding parties could be told and would believe any tall tale.

“Tell it to the Marines” then became words of instant dismissal in the general population; a response given upon hearing an account or explanation that the listener believes is obviously untrue. 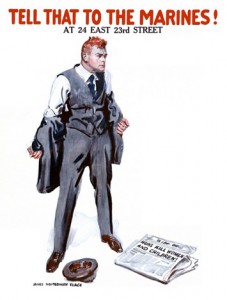 And that’s the way things have stood regarding the above phrase, at least in the UK. But a 1917 American recruiting poster from WWI helped change the meaning of “Tell it to the Marines” from that of an insult to words honoring a kind of “don’t tread on me” toughness indicative of the fighting spirit of the U.S. Marines.

The figure above has throne down his hat. He is in the process of throwing off his suit jacket. He is ready for a fight. At his feet is a newspaper with the headline “Huns Kill Women and Children!”, “Hun” being slang for Germans (Think Attila and his rapacious hordes.) The American everyman is not a Marine, yet, but will soon be one, and a hero.

The poster’s headline states ”Tell That to the Marines!” and now the catchphrase is a warning to any person or entity that wishes harm to the United States and its people, our allies, or to decency itself. The implication being that the U.S. Marine Corp, due to its high level of training, esprit de corp, and sense of can-do-ness would respond to any threat with all necessary toughness and tenacity. 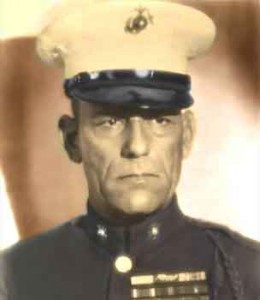 Nine years after the poster, in 1926, a silent movie titled Tell it to the Marines became a tremendous box office hit. It stars the versatile Lon Chaney – “the man of a thousand faces” – and is about two hard-driving, hard-drinking “China Marines” (another idiom for another time), who face down Chinese bandits and rescue refugees in the vicinity of Hangchow. In other words, it’s the story of two marines in a challenging and dangerous situation doing the right things in the right way at the right time.

And the ultra-tough visage of Lon Chaney communicates instantly a kind of take-no-nonsense attitude that Americans love. (Chaney also played Quasimodo in a silent version of The Hunchback of Notre Dame, and the Phantom in a silent Phantom of the Opera. The stark images of his portrayals in these movies are so powerful that they continue to haunt the American cultural subconscious to this day.)

In a 1942  “Fireside Chat” – President Franklin D. Roosevelt’s name for his regular radio broadcasts – he addressed the American people about two months after the attack on Pearl Harbor, and he said …

“… From Berlin, Rome, and Tokyo we have been described as a Nation of weaklings – “playboys” – who would hire British soldiers, or Russian soldiers, or Chinese soldiers to do our fighting for us.

Let them repeat that now!

Let them tell that to General MacArthur and his men.

Let them tell that to the sailors who today are hitting hard in the far waters of the Pacific.

Let them tell that to the boys in the Flying Fortresses!

LET THEM TELL THAT TO THE MARINES!”

“Tell it to the Marines” has firmly become part of the U. S. Marine Corps lexicon and tradition and is usually expressed with a little bit of swagger and with a lot of pride. My advice to any unfriendly individual who has a hankering to tell a Marine something other than “Thank you” is to choose your words carefully, with good intention.

Or otherwise, watch out!