“Hey Rube!” is a rallying cry used by circus and carnival workers who find themselves in a serious confrontation with customers. It is used to summon backup from fellow workers, and can be employed as an expression for the fight itself.

At some time in the early 19th Century in America, the name “Reuben,” then shortened to “Rube” became synonymous for an unsophisticated person who dwells in the countryside (i.e. a “local yokel,” a termed to be explored in a future blog entry.) Gradually “Rube” took on the added connotation one who is also easy to fool or “con”.  According to Wikipedia, one of the first mentions of the phrase “Hey, Rube” appeared in a 1882 article in the Chicago Times. 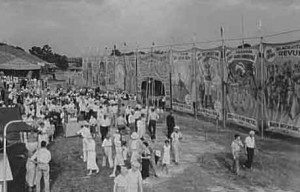 And it was a phrase that came in handy, because by that time both “carnie” and circus folk were in a state of almost constant contention with their customers. Ticket buyers suspected the midway games were rigged, that food they bought was adulterated by harmful chemicals and prepared in unsanitary fashion, and that they ran the risk of being shortchanged when they bought tickets.

Of course, the “Rubes” were right about all these things.

In fact, big top circuses would regularly bid off ticket-selling booths as a concession, with winning bidders expecting to make good on their investment by regularly shortchanging ticket buyers.

One method used was to dig a shallow pit in front of a ticket booth and fill it with sawdust. While making change, the ticket agent would bang the coins on the stand, causing them to fall off and sink into the sawdust. If ticket purchasers tried to search for the lost coins, the seller would yell “Move on, you’re holding up the line,” which would intimidate them from looking too thoroughly for their lost money. At the end of the day, ticket agents would dig up and sift through the sawdust, thereby retrieving the coins and making a hefty profit.

Shenanigans like the above often led to physical confrontations, which were followed by the throwing of many knuckle sandwiches. No wonder carnies, roustabouts and other circus employees invented “Hey Rube” – a call that invited backup and odds in their favor.

For an expression that sounds pretty old-timey, I actually had two encounters with “Hey Rube.” The first time was when I was six or seven, when my dad and I were watching a TV drama in which the cry was used in a circus setting. I asked him what “Hey Rube” meant and he proceeded to tell me a story. 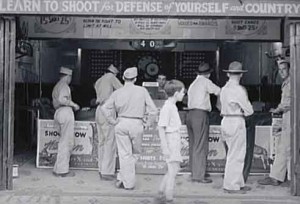 It was right after WWII ended. He had come back from overseas, but he was still in the service. One Saturday night while on liberty, he and a fellow Marine decided to go to a nearby carnival on the outskirts of town. When the two guys ended up at a shooting gallery my dad said he thought he had it made, having been trained as a combat marksman. But after dropping a lot of change and not scoring any hits, Dad thought it was time to initiate a serious discussion with the gallery operator. “It wasn’t the stuffed Mickey Mouse that I wanted to win and send back home to your mom,” he said, “it was the principle of thing.”

Well, dad said he didn’t take more than two steps forward when the operator yelled “Hey, Rube!” and suddenly there were at least two dozen carnies with pipes, crowbars, hammers, and wrenches coming out of nowhere at the two marines. The soldiers, both battle-tested Pacific war veterans, decided on a quick retreat.

“Son, it was like facing a banzai charge,” he said, which I knew from an earlier story he had actually experienced and survived.

The next time “Hey Rube!” came up was when I worked with a guy, about my age, who told me that in 1979 after graduating from college, he was employed for a year by a traveling carnival.

After work he would tell me tales of that year, of high romance and drunkenness, and running the Ferris wheel. So remembering my father’s story, I asked him if he ever heard the expression “Hey Rube!”?  “Heard it? Hell, I used it. Everyone used it. It was kind of an insurance policy for dealing with some pretty bad dudes – motorcycle gang members, drunks, other excitable types,” he said.

So now as I come to my end of this little exegesis, I’d like to mention that in the Wikipedia entry for “Hey, Rube!” there is a line that says “some American renaissance fairs have adopted the practice of calling “Hey, Rube” when a performer is accosted by unruly patrons.”

Renaissance fairs? You mean those crazy, zany places of mismatched costumes and bad English accents? Those summer job havens for high school and college drama students? Well, yeah, I guess on a hot August afternoon, after a visitor has had too many flagons of ye olde Budweiser, and a kid dressed up as a beefeater or minstrel is being hassled, he or she needs a little backup.

Come to think of it, we all need a little backup sometimes.