To many, the figure of speech to buy the farm sounds like a day-dreamy but worthy aspiration from a more gentle, rural America, a time of cows in pasture mooing lazily and sun-drenched fields of crops waving gently.

Actually, though, the expression is extremely grim rather than bucolic. Plain and simple, it’s used to indicate someone is dead. 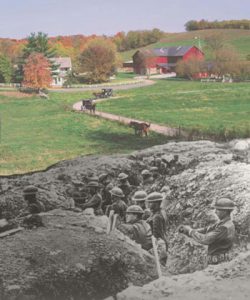 Most famously the phrase is reserved for its dramatic (and slightly sardonic) effect. It’s usually used in military situations to note a sudden and violent demise, as in …

“Haven’t you heard, sir? He bought the farm. Last night. On recon. A sniper, sir.”

Or similarly, in civilian situations, the idiom can be applied to a fatality occurring in the course of particularly risky or dangerous behavior…

“I remember the 1978 Daytona 500, during the third lap, when ‘Lightning’ Ted Offenbach hit the wall.”

For more ordinary deaths (though I’d suspect no one would consent to calling her or his death “ordinary”), this peaceful-seeming phrase is used like any other euphemism, i.e. a word or group of words, gentler on the face of it, to take the place of more blunt or disturbing language.

“Yeah, good ol’ Gramps finally bit the dust. Gave up the ghost. Kicked the bucket. In other words — He. Bought. The. Farm.

Origins of To “Buy the Farm”

Back before I started this blog, I used to think my computer, teamed up with Google and the Internet, was a magical machine that would provide me with endlessly correct answers for any or all questions I posed. Show me the telephone numbers of English bookstores in Kabul! How is beef jerky manufactured? (Don’t ask.) What is the average gestation period for African elephants? But some Internet queries just don’t have satisfying answers. And that goes for the origin of the idiom buy the farm.

There seems to be 3 or 4 explanations circulating on the web that concerns the meaning and origin of the idiom buy the farm, all of them synonymous with death and its finality, and all of them dubious and extremely light in terms of historical references.

One explanation holds that bought it, minus the farm was common among Commonwealth troops during WWI or WWII. Another theory arose from the notion that when a U. S. military pilot crashed his plane into a field, usually a fatal occurrence, the government would compensate the farmer for damaged crops or buildings (though I doubt any sum would ever be enough to buy a whole new farm or even pay off the mortgage on an existing one.)

A third alternative origin history hypothesizes that to buy the farm comes from a universal wish among soldiers to leave the strife of war and retire to somewhere peaceful, a farm say. And of course death would be the ultimate retirement, a gravesite being the final piece of property where a serviceman or woman would reside.

But it is the fourth backstory, though the least documented, that I believe to be a true account. Why? Because my grandfather Otto said so, when I was no older that 6 years old.

He and I were together, watching a movie set during WWI – yes, TV used to be an intergenerational family thing back in the day – when he was the first person to talk to me about the War to End All Wars, which then had occurred less than 40 years ago. He was part of it, almost; he was drafted, but peace broke out before he was inducted.

I was enthralled. Grandpa Otto gave me a pint-sized history of the Big One, and then he said, “You know what soldiers used to say, when someone got killed in battle? They’d say “he bought the farm.”

He then further explained the government gave the family of the killed soldier a death benefit of $10,000, enough, to pay off any debts on the family farm, or to buy an entirely new one. Since my allowance at the time was an impressive two shiny quarters a week, the Army remittance seemed a fortune, and adjusted for inflation, it probably was.

But even as a little boy I sensed my grandfather was trying to convey that the doughboys’ deaths were something serious, big, and profound, even if I wasn’t ready to understand the whys or wherefores of the conflict.

And even now, when I read headlines about issues of war and peace, that idiom to buy the farm, and my grandfather’s story behind it – sad, lonely, and eloquent – haunts me to this day as a father and a citizen.

As I try mightily to end this blog on a lighter note, readers may want to listen to two songs appearing below that were extremely popular among members of the AEF (American Expeditionary Forces), during World War I and also with the civilians back home.